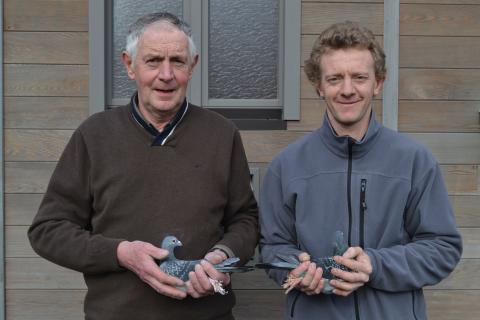 We receive a lot of messages from fanciers who have top results with off spring of the Hok Jos Vercammen pigeons. It would lead us too far to publish them all, but some of them are that special that we want to share them with you.

Dirk and Bart De Lodder from Waregem (Belgium) are professional contractors. In the year 2010, during one of their construction works, they discovered an injured pigeon. It appeared to be a pigeon of our loft. They contacted us and we agreed that they could breed from this bird after it had recovered. This bird became father of the hen B11-3041046. That time Dirk and Bart did not have a clue yet that this hen would turn into one of the best birds they have ever had.

In her year of birth, B11-3041046 flew only some training races. As a yearling she wasn’t entered on the races. It was only in 2013 that Dirk and Bart De Lodder started to race old hens, so B11-3041046 had to stay in the aviary for a year.  It was a risk to put her on the racing loft after a complete year of inactivity, but they were really convinced about the qualities of this bird. In order to put her back on track, she was only raced on the short distance in the season 2013. She won three times a top 10 position! In 2014 she put herself in the spotlights by winning amazing records, on all distances and in all weather circumstances

All these results were won in one year, really impressive!

We want to congratulate Dirk and Bart De Lodder with this super pigeon and we hope she will breed many more winners for them.