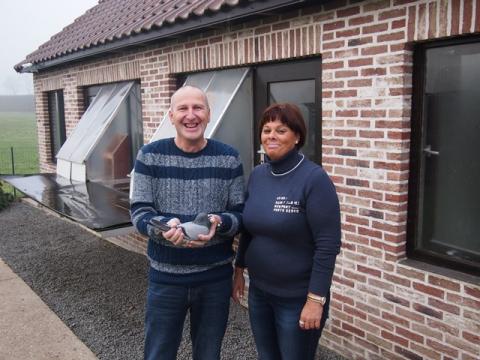 We published this blog in the fall of 2014. It is as special story and a great reference!

Paul Wijns (Herenthout) has been crowned as 1st National Champion Long Distance Youngsters KBDB 2014! He owes this success to the introduction of the Hok Jos Vercammen pigeons.

The national championship for young birds is one of the most prestigious and difficult KBDB championships to be won. What are the requirements for this championship? There are six national races for young birds and on four of them your first and second nominated youngster need to win top prizes. The racer with the lowest total coefficient wins the championship. This is not easy knowing that whole Belgium is competing, not just one region! The distance of each national race is between 450 and 600km.

You can surely call the career of Paul Wijns on the national races for young birds a success story. In his first complete season on these races he became 1st National Champion KBDB! Paul  is actually an enthusiastic short distance racer. During the years his old strain has been tested and selected on the short distance. When he tried to races this birds on the 500km races, it was no success. This is not strange because flying seven hours is something completely different than flying one hour! Therefore you need stronger birds. Birds with more endurance. With this information in mind, Paul acquired three direct Hok Jos Vercammen pigeons. He put them on the breeding loft and raced the children and grandchildren of these three birds. The result was phenomenal.

Which Vercammen birds are responsible for this national triumph?

Paul Wijns introduced this bird when “Shakira” was a yearling. That time she was not famous yet but we really advised B11-6340845. We were really convinced of the breeding potential of “Shakira” and now, three years later, it seems that we had made a good judgement call!

Six youngsters at the loft of Wijns were responsible for winning the national KBDB title. Amongst those six birds, there were two direct children and two grandchildren of B11-6340845! In his club, Fondclub Herentals, Paul had the 1st and 2nd Ace-pigeon on the national races for young birds. Those two ace-birds are B14-6122453 and B14-6122415. They are both direct children of B11-6340845!

Paul is of course delighted with this prestigious title. He beat all the young bird specialists. Famous champion Gaston Van De Wouwer ended for instance on the fifth place.

Nothing goes above winning yourself. However, the national KBDB title of Paul Wijns, thanks to the introduction of our pigeons, makes us very proud as well! The fact that he has won this title in his very first year on the semi-long distance races, makes it even more impressive. Congratulations!